Rubin Caldwell, 1860 to 1962, built this barn prior to 1918 according to oral tradition provided by his son, McKindley Caldwell in 1985. It was the first flue-cured log tobacco barn documented in 1985 by this investigator as part of a historic house survey project. The original location was approximately 200 yards east of its current site, having been moved in 1918. McKindley Caldwell was proud to be able to describe the flue-cured tobacco process and barn features, knowing it was a century old barn type and tobacco variety that was all but forgotten. He described the rock furnace built inside on the dirt floor of the barn, configured in a “U” shape and sealed with clay mud. One end of the “U” opened to the outside where the fire was built and tended, with the other end of the rock furnace built to accommodate a metal flue pipe that extended out and up to vent the smoke. There were only a few of the original furnace rocks remaining, the others taken to be used in other building projects. The surviving barn today is only a shell of logs, the roof having collapsed a decade ago. This barn is in a section of the Big Pine Creek valley with minimal bottom land, and was part of an active farm when built. Most of the tillable land on this farm has returned to forest.

Outbuildings: can house/root cellar /case house with rock ground level, frame second floor, may have also served as a granary. A livestock barn is also on site. See other file for 1985 photos and data on that barn 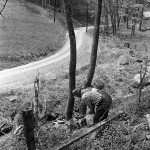 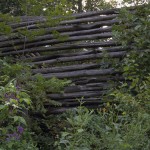 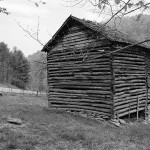 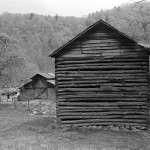 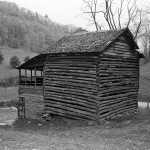