The Obediah and Polly Odell Jarrett family moved from what is currently known as Jarrett Cove in the Big Laurel Creek area of Madison County, approximately in the mid-1800’s, to Blow Hole Road off Rector Corner Road. The original house was a small log cabin on, which was later relocated to the owner’s farm in Buncombe County, and still exists. They later moved to the existing farm.

Family oral tradition describes Obediah as a Civil War Confederate soldier who deserted three times, but was favored by Governor Zebulon Vance for reasons unknown, likely political, and was given a 90-day stay from punishment by Governor Vance, then apparently was freed. Obediah named his first son, Zebulon Baird Vance Jarrett, after Governor Vance as a result. Zeb Jarret married Zade Ponder, sister of Zadock Ponder, who was a son of Robert Ponder, one of the first Ponders to settle in the area.

Zeb Jarrett had a son, Olin, who was skilled at carpentry, and was the father of the current owner, Forrest Jarrett. Olin’s wife attended Dorland Bell Institute in Hot Springs.

Owner at the time of this record Forrest Jarrett remembers “barn raisings”, where he watched the men get all the logs cut and ready, then hew the sides “grave smooth”. The women would assemble long tables from saw horses and boards to lay out the food to feed the many men helping with the work.

The garage has a casing house underneath, also used for storing apples, potatoes. The can house or root cellar was under the main house. There was once a carriage house and a smoke house with a granary on the second floor. In the fall of the year they would prepare for hog killings by scalding all the implements and containers in a pot of boiling water. A killed hog would be lowered by block and tackle and mule into a heated 55 gallon drum of water to scald the hair off. After butchering, the meat would be rubbed in salt that had borax, black pepper, and brown sugar mixed in, then rubbed in a large wooden trough made from a half-round section of log; the salt trough or box. In the smoke house, they used old rags and corn cobbs to set a smoldering fire for smoking. A ham had to be smoked 1 day for each pound of weight, for each day above 32 degrees. Then the ham was put into a feed sack and hung from the smoke house rafters. The first meal from a hog slaughtering day would have been the tenderloin. Rabbits were also a common meat, and were also trapped or shot to sell to the local butcher man, E. Y. Ponder (later Sheriff), who picked them up at each house hanging from a fence post, along with butter if they had it, and paid 10 cents each rabbit to the farmer.

Electricity was first available at this farm in 1946. Before that, Aladdin lamps were used for light.

Corn crib has wood carved hinges. Unusual lack of tier poles. This barn may never have had tier poles, as there are no signs of connections to the side walls. 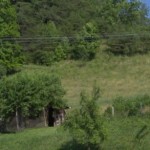